I love my editors this year, and they’re one of the most talented groups I’ve taught, but man, are they bad at paying attention to me.  What was that over there? A shiny bauble?  What was I saying again…

They come to class, and the first thing most of them do is migrate to the desk they’ve sat in all year, spread out three different homework assignments that are due later in the day, open their laptops to start some YouTube music videos playing in the background while they check Facebook and argue with each other about who has more rhythm.  And maybe, just maybe, if I’m lucky, they open up one of the stories they’re supposed to be editing in another tab in their browser so that they can pretend like they’re working if they see me coming near.

At the start of class, they know that they’re supposed to close their computers, but I struggle to get them to do so.  When I try to get their attention, they lower their screens halfway, leaving one hand on the keyboard as if I can’t possibly have anything to say that will take more than 5 seconds and as if it would be a horrible inconvenience to have to reposition both of one’s hands on the home row.

When I tell them I really want them to close their computers, they lower the lids even further, so that they’re only open an inch or so, their heads tilted just slightly so they can still bask a little in the glow of their screens even if they’re unable to see what’s there.  After a round or two of “Come on, seriously?” I finally hear those satisfying clicks of computer lids closing.  I should have their attention now, but there’s still that AP textbook open and worksheet beside it (because God forbid, a minute not spent memorizing terms and cramming facts in their heads in preparation for the AP exam is a minute wasted).

So I’ve had to take it to a whole new level.  When I’m ready to begin Journalism class, I start by making them physically move at least ten feet from everything they own.  This usually ends up with everyone sitting around on the floor in the middle of the room.  As this reminds me fondly of the camping experiences of my youth, I have affectionately dubbed this as “campfire time.”  This term seems to resonate with my editors too; no doubt they remember watching YouTube videos of campfires when they were kids. 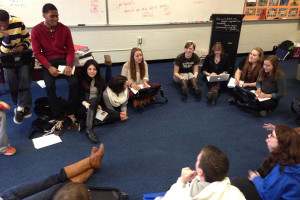 I count six editors who weren’t able to leave their stuff behind. Guess it’s time to crack down again.

I do my best to respect their attention during these meetings –– I keep the class meetings as short as I can, and I let them know when we start if it will be 2, 5, or 15 minutes long, and if it’s going to be longer than that, I tell them why.  They seem to breathe a little deeper, and a more relaxed air fills the room.  And what really matters is that they start communicating with each other without technology.

We accomplish a lot in our campfire sessions.  We talk about what’s going on in the school that we need to report on.  We assign new stories.  We set and adjust deadlines.  We talk about which stories are ready to be published or which ones will be by the end of the day.  We discuss and plan staff editorials, feature spreads, and covers.  This is where I see their true leadership come through.

When we’re done with our campfire session, we all know what needs to get done that day, and I have confidence that my editors will balance their many responsibilities as we all return to the chaos of our modern journalism classroom.