I’m voting for Joe Biden in November because Democrats will be more responsible stewards of the economy than Trump and will help raise the fortunes of working-class Americans.

Here’s a chart to mull over –– it shows how the stock market has performed under each of the last four U.S. Presidents expressed as a percentage from where it started when their terms started. 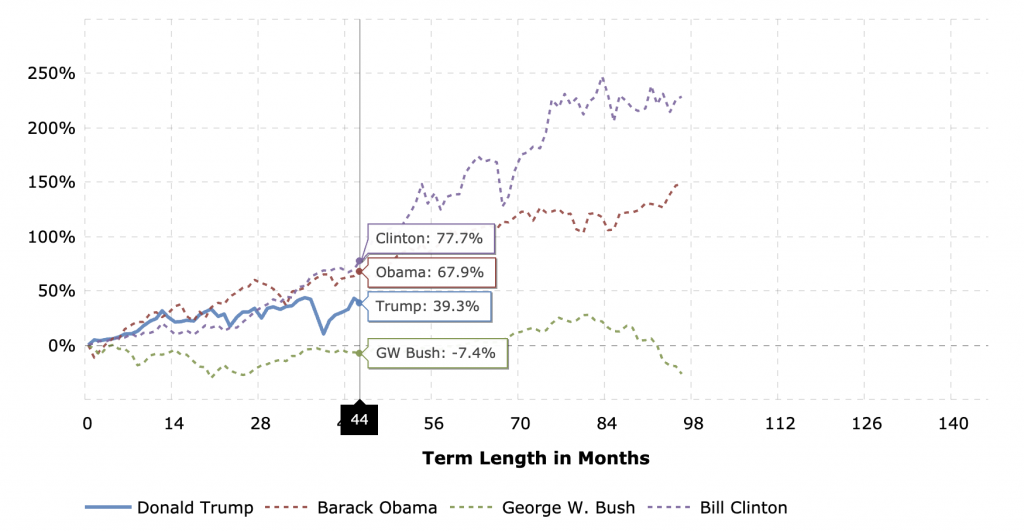 Here’s the deal –– it’s been a pretty average market under Trump. I don’t blame him for it, and I don’t give him credit for it. But if he’s convinced you into thinking that it’s spectacular and that he’s responsible, then you’ve been conned.

Have you noticed how on the days when the market goes down, it’s always someone else’s fault? Can you possibly believe that the complex forces that shape the market are less powerful than Trump’s random ramblings on any given day?

This is the Trump pattern –– brag about the stat that looks good and ignore everything else. In July, August, and September of this year, Trump tweeted “Great jobs numbers!,” ignoring the fact that there are still more than 11 million jobs that were lost between February and April that haven’t yet returned.

The American economy is in trouble, and there are Americans who are in great need. Trump is not working in a bipartisan manner to solve this problem. The Republican side seems to honestly believe that their side will create prosperity for all, at least that’s what the memes I’ve seen them post on Facebook say.

Trump’s latest gambit of a payroll tax deferment is a complete swing and a miss, and it definitely won’t bring prosperity to working class Americans. It will only aid those who already have jobs, and its assistance is temporary as the deferred tax will be due by April 30. In other words, it’s a 7 month loan to yourself. Big whoop.

I’m ready for leadership that will take a measured, intelligent, and comprehensive look at the economy and craft policies that truly help the working class voters of America.